Getting ready for “biodiversity engineering”: integrating theories, methods and big data for the functional restoration of resilient ecosystems

Can ecologists manipulate biodiversity to engineer the composition of ecological communities and ensure that ecosystem functions will persist over time? A new article published in Trends in Ecology and Evolution suggests that we are just a few steps from making the answer be “yes” -- requiring cooperative research to apply theory, big data and computational power to save Earth’s ecosystems from collapse.

Many scientists consider that the long-lasting effects of humans on Earth’s ecosystems are pervasive enough to characterize a novel geologic epoch -- the Anthropocene. Species extinctions in the Anthropocene may rival the great mass extinctions recorded over the geological time and require the urgent application of ecological knowledge to restore biodiversity and ecosystem functioning across the globe. The good news is that we may now have unprecedented theoretical and methodological conditions to face such a challenge, argues a new article just published online and that will appear in the August 2018 issue of Trends in Ecology and Evolution. The paper, authored by Brazilian and British researchers, proposes a framework to integrate novel perspectives in Evolutionary Ecology, biodiversity big data and well-known ecological restoration methods to catalyze a new eco-evolutionary approach to biodiversity management. The proposed framework integrates advances in ecological and evolutionary theories, alongside with adaptive network models and large datasets provided by next-generation sequencing techniques, to support the manipulation of community composition by adding or removing species for restoration, such as occur in translocation events or in the eradication of invasive species, to improve ecological resilience and functional diversity over anthropized landscapes.

The authors, who were supported by the São Paulo State Research Foundation (FAPESP), CAPES and the Royal Society, convincingly show that a major opportunity to apply evolutionary ecology and network science to save many ecosystems is just emerging, as acknowledged by John N. Thompson, Distinguished Professor in Ecology and Evolutionary Biology at the University of California, widely known for his geographic mosaic theory of coevolution and who is not an author of the work: “This is a splendid analysis of why eco-evolutionary, coevolutionary, and adaptive network approaches are needed to advance the science of restoration ecology. Equally important, the authors go further to suggest how these approaches can be combined to help guide practical approaches to maintaining and restoring the earth’s rapidly degrading ecosystems. Their analysis provides a way of taking into account the fact that the dynamics of populations, species, and species interactions may be driven as much by evolutionary processes as by ecological processes even on the time scales of human lifetimes and the conservation goals we set for species, communities, and ecosystems”.

The manipulation of ecological communities for restoration has a long scientific history. However, much of such history has been about adding or removing species to restore patterns of plant and animal species richnesses, instead of explicitly focusing on key ecological and evolutionary processes that can ensure that ecological resilience and functional diversity will persist over time, which can be seen as an ultimate conservation and restoration goal. The new TREE article argues that we are now  entering a new phase, from both the epistemological and technologies points of view, in which such a goal can be objectively pursued: “We are now experiencing a remarkable paradigmatic shift with broad repercussions for ecological restoration, as compelling evidence accumulates to sustain that the conservation and restoration of species-interactions have a central place in biodiversity management”, explain Dr. Rafael Raimundo, from the Department of Engineering and Environment at the Federal University of Paraíba in Brazil and first author of the work. Such a key role comes from the fact that “species-interactions represent the link between ecological and evolutionary processes and can also be seen as the connection between biodiversity structure and ecosystem functioning”, Dr. Raimundo states.

Understanding patterns of ecological interactions in terms of the processes that structure them are key for ecological restoration for different reasons. First, ecological interactions have widespread demographic consequences, “as easily envisaged when we think of pollinators contributing to plant reproduction or predators that regulate populations of prey”, illustrates Dr. Paulo Guimarães, from the Department of Ecology at the University of São Paulo in Brazil and co-author of the work. These demographic effects of species-interactions propagate across the ecological community as a major determinant of species abundance patterns. In addition, by affecting reproduction, species-interactions also shape the strength and modes of natural selection, rapidly affecting the evolution of functional traits that are ecologically relevant, such as the bill sizes of frugivorous birds and the size of the fruits they disperse. Rapid trait evolution is a fundamental process shaping the local variation of trait values that matter for ecological and evolutionary dynamics -- “for example, previous research has shown that the extinction of large-gaped frugivorous animals is likely to affect the population structure and the phenotypic evolution of plant species”, states Dr. Guimarães. Therefore, understanding the feedbacks between the dynamics of species abundances, trait evolution and patterns of interactions is essential if we aim to build responsive solutions for ecological restoration.

Evolution of traits that mediate ecological interaction may occur rapidly in disturbed communities, as the previously reported evolution of small palm tree seed sizes after the extinction of large-gaped frugivores (A) in the Brazilian Atlantic Forest. Evolutionary changes in keystone species are likely to propagate to change trait and abundance distributions at the community level, as small-bodied frugivores (B) become the most common seed dispersers. Photos by Mathias M. Pires. Figure from Raimundo et al. 2018, Trends in Ecology and Evolution, https://doi.org/10.1016/j.tree.2018.06.002.

In the last decades, scientists developed a valuable tool to face the challenge of understanding ecological complexity. The application of the network approach to Ecology provides a synthetic way of describing the structure of ecological communities and allow us to account for the interplay between ecological and evolutionary processes and patterns of ecological interactions. However, the new article explains, the evolutionary aspects of ecological network dynamics have been mostly overlooked in restoration ecology -- and this was a major missing piece in the puzzle of ecosystem management. Excitingly, the authors argue that the much-needed incorporation of eco-evolutionary principles into the science of restoration can now be catalyzed by adaptive network models (ANMs), a class of mathematical models used to capture the feedbacks between the macroscopic dynamic of network topology and the population-level dynamics of species. In other words, changes in the patterns of ecological interactions that define network structure are followed by changes in the dynamics and properties of populations of each species within the network, such as their abundances and trait values. In turn, these ecological and evolutionary changes in species properties can trigger novel reconfigurations at the network level, closing a feedback loop. Although the inception of ANMs has clear potential as a major methodological breakthrough in Community Ecology, until recently key data needed to inform these models precluded their application as a predictive tool in restoration ecology. And here comes the turning point: next-generation sequencing (NGS) techniques are now providing species-interaction data in an unprecedented scale: “advances in DNA sequencing technologies are resolving previously intractable questions in functional and taxonomic biodiversity and provide enormous potential to determine hitherto difficult to observe species interactions, from host-parasitoid associations to gut content analyses of animals”, explains Dr. Darren Evans, from Newcastle University and co-author of the work. Importantly, NGS techniques not only inform the structure of ecological of networks, but also provide data on the phylogenetic relationships between the species within a community, which is key to predict how a ecological network will rewire its structure and the following dynamics will reshape traits and species abundances: “merging NGS techniques with ecological network analysis provides new tools to examine the resilience of interacting communities to environmental change, whilst also incorporating important attributes such as functional diversity ”, states Dr. Evans. 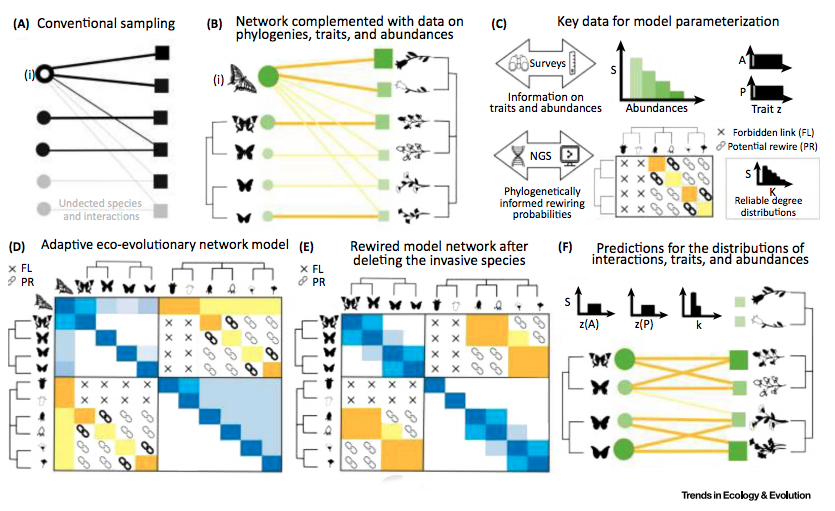 The new paper discusses a roadmap to integrate new methods in Evolutionary and Network Ecology to improve ecological restoration strategies aimed to recover the resilience and functional diversity of ecosystems. Figure from Raimundo et al. 2018, Trends in Ecology & Evolution, https://doi.org/10.1016/j.tree.2018.06.002.

The novelty brought to restoration by phylogenetically-informed adaptive network models is the possibility of predicting the effects of adding or removing species from communities on resilience and functional trait diversity, as  illustrated in the paper by the figure reproduced above, which depicts by the hypothetical case of predicting how community resilience and functional diversity would respond to the eradication an invasive species. As a take-home message, the authors point that this is an outstanding opportunity to build collaborative long-term research to enlighten the mechanisms driving restoration outcomes and hence support responsive strategies for restoring ecosystems.

The new paper by Raimundo, Guimarães and Evans in TREE brings an optimistic perspective facing the global environmental crisis  -- that we have now both the epistemological and methodological conditions to advance the application of ANMs as a predictive tool for restoration of species interactions that are likely to ensure the long-term persistence of biodiversity and ecosystem functions.  It is now key to broaden the dialogue to include practitioners and policymakers, ensuring the funding of long-term cooperative projects to build a two-way street between modeling and experimental restoration research.